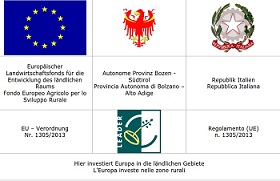 Is a European Union support program and aims to support the rural regions of Europe on their way to independent development. Since 1991, regions from all over Europe can participate in this EU program with a Development Strategy consisting of an analysis of the region, focus areas, objectives and measures.

Consists of all 26 municipalities of the Pustertal District Community and was recognized and approved by the Provincial Government of the Autonomous Province of Bolzano on 15.09.2015.

On the initiative of the district council Pustertal, the Local Action Group (LAG) Pustertal was established notary on 17 December 2015. Any natural person with an interest in the bottom - up implementation of the Local Development Strategy may become a member of the Association. At present, 205 representatives of public administration and private actors from all sectors are members of the association. The LAG has set up its own project selection committee, which evaluates the submitted projects, decides whether they are in line with the objectives of the Local Development Plan and are to be funded under Leader. By decree of the Landeshauptmann of 29.12.2016, the association was recognized as a legal person of private law and thus able to act.

The Pustertal region and the integrated financial plan were approved on 06.09.2016 by the regional government of the Autonomous Province of Bolzano. It has been developed with the help of the Leader groups in the territory and corresponds to the needs of the Leader region.
For the implementation of the local development strategy, € 3.23 million is available to the Leader Area for the promotion of projects and for the administration. Only projects with a clear link to the local development strategy and the funding guidelines are supported.

Is the central administration and information point for municipalities, the initiative groups and interested private individuals and companies who want to implement ideas and projects. This task has been taken over by the Local Action Group (LAG) Pustertal association as an association with legal personality.